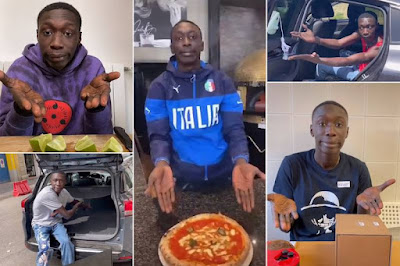 Senegalese TikTok user Khaby Lame, known for his hilarious facial expressions, has become only the second person to cross 100 million followers on the social media platform.

Lame, 21, whose real name is Khabane Lame, started his TikTok account @khaby.lame in March last year after losing his job at a factory, owing to the Covid-19 pandemic. Within two months, his deadpan reactions to videos and comedic expressions without any spoken word earned him a global following, quickly amassing more than 50,000 followers.

In February, he reached the one million milestone, with famous footballers, such as Juventus player Paulo Dybala and former Italian player Alessandro Del Piero, featuring in one of his videos.

Last week, TikTok announced Lame had become the second person in the world to cross 100 followers on the platform, after American social media star and dancer Charli D'Amelio, who currently has 122 million followers.

Lame, whose family moved to Italy when he was only a year old, is also the first person from Europe to hit the 100 million milestone.

“His desire to make the most out of his situation and turn it into an opportunity to achieve his dream of making people laugh motivated him to start a TikTok account and share his first comedy videos,” TikTok said in a blog post.

“With one funny video after another, his followers began to grow, and in less than 17 months, Khaby has quickly become one of the most recognised and loved TikTok creators globally as he continues to use his unique creativity and sense of humour to spread joy to a global community.”

Lame said he has been “passionate about entertaining and making people laugh since childhood”.

“I will continue to work towards my dreams, knowing I can count on a beautiful community ready to cheer me on,” he said.

Counting Hollywood star Will Smith as one of his idols, Lame said the inspiration for his videos came from watching The Fresh Prince of Bel-Air as a child.

“I loved his comedy and I also loved all of his movies. So I decided to record some sketches on YouTube with a friend of mine and, even though there were very few views, I enjoyed making them,” he said of his comedic start.